Get started for free Shop now

Is snoring dangerous for your health?

Have you ever thought about sleep deprivation as alcohol intoxication? Probably not, but snoring should be considered in the same risk zone as being overweight, smoking or drinking alcohol. Accepting snoring as an annoying sound or a tiny health issue to be ignored is the first step towards sleep apnea. To change this approach and start taking snoring seriously let’s figure out is snoring a bad sign and why untreated snoring can be dangerous.

Snoring is not just annoying sound

We often don’t pay serious attention to that sound, but can snoring be dangerous to your health?

Firstly, we should accept that snoring can be a symptom. It is not dangerous in itself but can be the first signal of disease. Loud and frequent snoring causes various pathological phenomena. The main one is daytime sleepiness which occurs because of brain micro-arousals during snoring. It lowers sleep quality and dreams become fragmented. As a result, no rest. What’s more, it can lead to obstructive sleep apnea.

Apnea is a serious problem for 10% of the population of the World. The possibility of brain cell death and even actual death is very high if it’s not recognized and treated early. So instead of spending sleepless nights elbowing your snoring bed partner, monitor his/her sleep behavior.

About apnea and hypopnea

Apnea literally means without breath, and obstructive sleep apnea (OSA) is a full airway obstruction during sleep for more than 10 seconds. It occurs when there is a physical block in the nose or throat. As a result, snoring sounds are produced. There’re 2 more types of sleep apnea:

Hypopnea syndrome is a partial blockage of the airway and this is a feature of OSA. During hypopnea, a person experiences this when breathing is reduced by 50% or more.

So all the evidence points to a connection between snoring and sleep apnea. 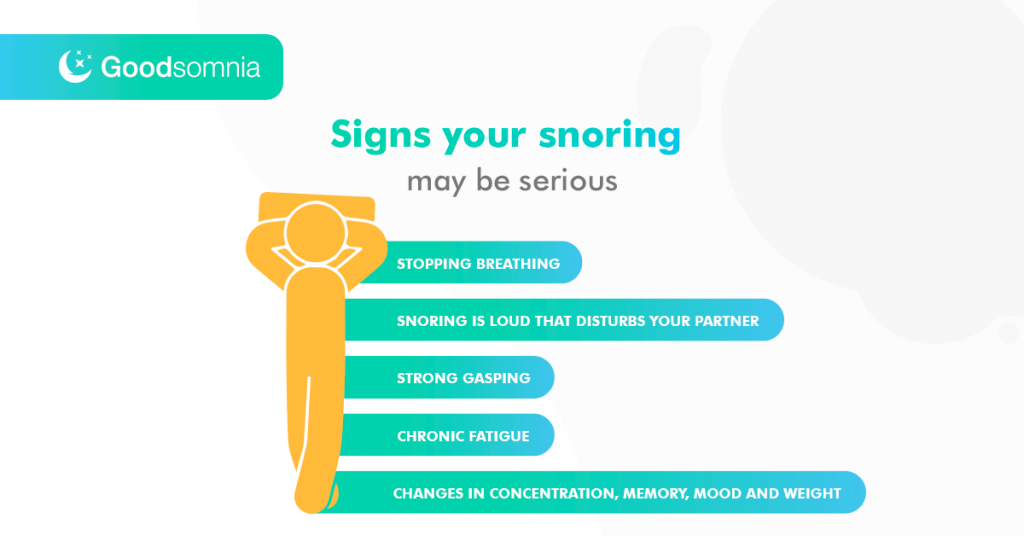 What happens if snoring is undiagnosed

People with prolonged undiagnosed breathing interruptions are at a higher risk of getting a disease. Here are some outcomes of untreated snoring and apnea.

Without 8-hours sleep that most people demand, our body is exhausted. Productivity levels fall, the immune system fails to fight diseases and overall health state suffers.

Chronic snoring takes a lot of energy so a person, who snores runs out of resources to have sex, for example. It was found the louder a man snores, the lower level of sexual satisfaction he has.

People with OSA find it difficult to regulate the oxygen level in their body. The risk of heart damage and high blood pressure, also called hypertension, is greater. In the most serious form of snoring heart attack risk increases and leads to heart disease or stroke.

It was found OSA sufferers have less brain gray matter than those who don’t have the disorder. Poor, quality sleep can lead to memory loss, emotional problems, decreased cognitive functions.

Snoring and apnea become the irritant for your throat and speed up the aging process. As a result, the muscles become less elastic.

How to monitor snoring

One way of diagnosis snoring is to take a sleep study. It can be done both at hospital (sleep disorder center) and at home. During this, all your activities are recorded.

Diagnosis of snoring can be a tricky thing to do but an inevitable part of the treatment process. Talking about self-diagnosis, all you need is attention to detail and noticing sleep apnea episodes, regular low quality sleep, high blood pressure, overweight.

Using a mobile app is the best solution for snoring control at home. Goodsomnia Lab app works like a very attentive and smart bed partner. Before going to sleep just switch it on and it starts to record all the sounds you produce during sleep. In the morning, you’ll have a full report of your sleeping behavior, depends on snoring remedies and factors. It will show you how often, loud and intensive you snored; calculated Snore value (%), Snoring intensity, Sleep debt and much more. You can send this report to your doctor.

If you really care about your health and health of your closest people, let it be a good tradition to monitor your sleep with the app. We all can contribute to good universal health making people more informed. Share this article with your friends – save lives!